Driss Yakoubi, professor at ESILV and member of the Modeling Group at De Vinci Research Center, is the author of a paper co-written with researchers from the Interdisciplinary Group of research in Finite Elements (GIREF) from Laval University.

In his paper titled “A coupled prediction scheme for solving the Navier-Stokes and Convection-Diffusion Equations”, Prof. Driss Yakoubi presents a new algorithm for solving solidification problems, such as phase change phenomena.

The governing equations combine the incompressible Navier-Stokes equations to a modified energy equation derived from the original enthalpy model. It is a multi-physical phenomenon because involves the combined operation of laws from several disciplines, such as condensed matter physics, solid mechanics, fluid dynamics and thermodynamics.  The numerical solution is then not trivial.  That’s why it’s a very active area of research.

The proposed scheme combines Newton’s linearization for the non-linear coupling of the velocity and temperature and the so-called rotational pressure correction for the velocity/pressure  decoupling. The projection-based method allows for decoupling the equations in a splitting manner while preserving reasonable accuracies for thermal effects in both solid and liquid phases.

Therefore, the implementation of this approach is easy and its efficiency in terms of CPU time is obvious. It is 30% to 40% less than the CPU time obtained with the standard mixed formulation. Furthermore,  the obtained precision is reasonable and the convergence rates of the estimates are optimal, namely the velocity rate = 3/2 in s suitable space.

Numerical results have been presented and well discussed compared to experimental data for a benchmark in phase-change problems, such as freezing of water and melting of octadecane in a square cavity benchmark. 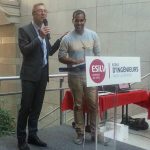 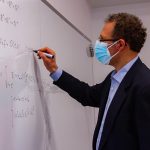