A second year student at ESILV, Class of ’21, Jamil Jabr discovered ESILV when he was in secondary school in Beirut. The programmes and educational project offered by ESILV convinced him to apply to the Parisian engineering school.

Knowing from an early age that he would like to make a career in finance, Jamil has always considered becoming an engineer.

When choosing to enroll at ESILV, Jamil first reviewed the school’s ranking. Its location, in the heart of Paris-La Défense, was also one of the reasons why the engineering school appeared like the best choice.

After completing his second and third years at ESILV, Jamil will choose one major out of the four offered to the fourth and fifth-year engineering students: Computer Science, Big Data and Connected Objects, Financial Engineering, Computational Mechanics and Modelling and New Energies.

He already set his mind on Financial Engineering and will do his second-year internship in a bank.

This two-year intensive foundation course provides engineering students with a programme of both theoretical knowledge and practical skills in mathematics, physics or computer science.

ESILV shares its campus with two other schools: business school EMLV and Internet and multimedia school IIM. Several times a year, students from all three schools team up to work on cross-disciplinary projects.

Another advantage of being close to a business school is the opportunity to follow a double diploma in engineering and management.

At the end of his five-year course, Jamil will graduate as an engineer but will also receive a management diploma from EMLV.

In the fifth year, Jamil is considering applying for the entrepreneurship programme. The latter enables engineering students to develop their business skills while on campus and why not launch a startup before having graduated.

Are looking to study engineering in France? Learn more about our programme for degree-seeking students. 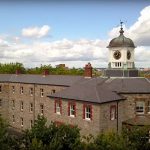 Meet our Partners: a Dual Degree with Griffith College