Xiao Xiao, the head of the Human Learning group at the De Vinci Innovation Center, is the second-place winner in the 2022 Guthman Musical Instrument Competition. Her innovation is T-Voks, an augmented theremin that speaks and sings, but also a joint research project developed in France.

Georgia Tech’s 2022 Guthman Musical Instrument Competition is an annual event aimed at generating the world’s next generation of musical instruments and identifying the best new ideas in musicality, design, and engineering. This year’s competition ran from 10 to 12 Mars and saw 26 semi-finalists from 16 different countries at their innovative and creative best. Among the 10 finalists, Xiao Xiao was awarded second place for her creation, a theremin 2.0 revisited.

Dubbed by the Guardian as the “Pulitzer of the new instrument world“, this award hosted by Georgia Tech is a destination event that attracts skilled contestants, academics and industry leaders from across the globe. Each edition includes a contest, a concert, a conference, and a museum exhibit. 2022’s performances combined traditional musicianship with advanced technologies and playful experimentation to transform common perceptions of what music is and how it’s made. This year’s judge panel includes big names in the music and art industry: Gerhard Behles, CEO of Ableton, Paola Antonelli,  MoMA’s founding Director of Research & Development, Rick Beato, YouTuber, and music educator.

Among this year’s contestants was Xiao Xiao, head of the Human Learning research group at De Vinci Innovation Center, where she guides students from the Devinci Higher Education in building interactive technologies for learning across domains. Xiao is also an alumn and research affiliate of MIT Media Lab, with a deep love for both art and science. As MIT Media puts it, “she swung from one extreme to the other, treating creativity and scientific inquiry as independent forces but finding it difficult to step away from either.” Today, as an inventor of a unique instrument called T-Voks, she once again finds satisfaction and achieves prestige through mixing creativity and technology.

T-VOKS: the Singing and Speaking Theremin

T-Voks, the singing and speaking theremin

T-Voks is an augmented theremin that sings with lyrics and recites poetry. It is implemented by connecting the theremin to Voks, a performative singing synthesizer. Originally developed for control with a graphic tablet interface, Voks allows for real-time pitch and time scaling, vocal effort modification, and syllable sequencing for pre-recorded voice utterances.

For T-Voks the theremin’s frequency antenna modifies the output pitch of the target utterance while the amplitude antenna controls not only volume as usual but also voice quality and vocal effort. Syllabic sequencing is handled by an additional pressure sensor attached to the player’s volume-control hand. Through the marriage of vocal synthesis with the theremin, T-Voks enables new forms of creative expressions not possible with only one or another.  “T-Voks, the singing and speaking theremin” is also at the heart of a scientific research project, jointly implemented by Xiao Xiao, Gregoire Lcqueville, Christophe d’Alessandro and Boris Doval from LAM – Institut Jean le Rond d’Alembert by Sorbonne University. 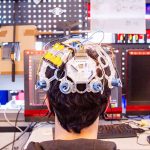 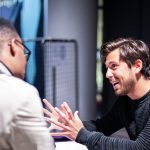 Pitching Your Creation: Tips for Engineers 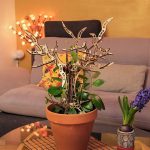