For the first time, the do it yourself DIY learning at the De Vinci Innovation Center is getting outside. The Creative Technology students had their first “radical learning” session in the heart of the Fontainebleu forest during a “Hummingbird in Space” bootcamp: four days to learn how to use satellites to take the most beautiful selfies on Earth.

A bootcamp-like kick-off for students in the Creative Technology major, members of the De Vinci Innovation Center community. The concept? To have students experience the benefits of radical learning, DIY, collective intelligence and anti-disciplinarity through a practical workshop dedicated to the space industry. During four days of intensive work, students were able to practice the methods used by scientists to take images of the Earth from space using meteorological satellites.

Being part of the DVIC community: Earth selfies in DIY mode

From August 23 to 27, nearby the Fontainebleu forest, the De Vinci Innovation Center organized its integration bootcamp for students in the Creative Technology major. In small teams and with the help of a pocket compass, the students had to find the components necessary for their project through an “expedition” in the forest. 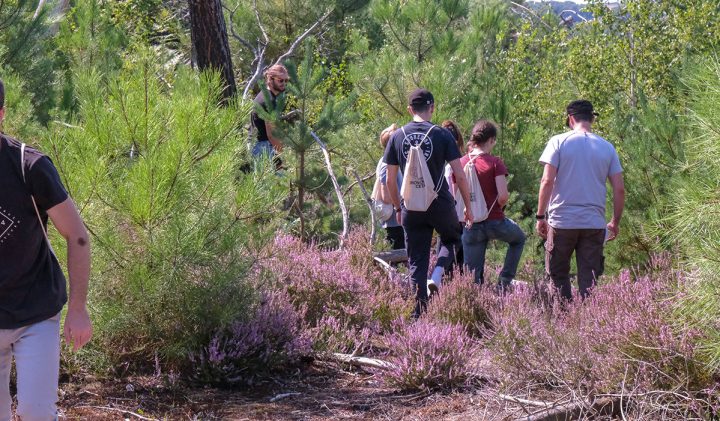 Students on a treasure hunt: tools hidden in the forest of Fontainebleu

With these tools and an assembly and calibration method handed down by Gershon Dublon and Xin Liu (Arts Curator of the MIT Media Lab Space Exploration Initiative), the participants then made radio antennas (known as VPOLs) out of wood and aluminium using a technical process they had to figure out.

Using these devices, the teams could pick up the signal from U.S. weather satellites, launched in the 1970s by the National Oceanic and Atmospheric Administration (NOAA). NOAA-15, NOAA-18 and NOAA-19 transmit on exact frequencies and use different orbits, so it was necessary to track their transit times.

This challenge was mostly about geometrical precision: it required several attempts to get the best possible images using antennas made by the students with their own hands and exploring different connection options. 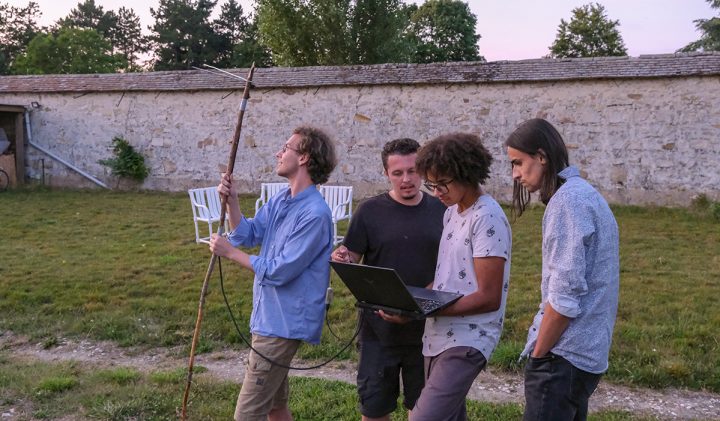 Guided by the staff, the students test and calculate the location of the radio antennas

Each satellite makes two revolutions a day; therefore, it was essential to anticipate the following transit times so that the next version of the antenna would be ready and in position on time.

During a flyby, the antenna must be held in the direction of the satellite, and follow its path in the sky from horizon to horizon. Since the satellite cannot be seen with the bare eye, its trajectory must be estimated using a compass, a stopwatch, and monitoring the evolution of the signal quality. The signal thus obtained is recorded and then interpreted by a program that will produce the photo taken from the NOAA satellite as it orbited the Earth.

It was an excellent opportunity to take earth selfies from space: unique shots that reveal our planet as it would have appeared if we had been orbiting the Earth. It is also an opportunity for these students to experience and transmit – by contemplating our fragile ship – an artistic emotion as well as an aesthetic pleasure.

Before starting their first engineering year at DVIC, the students had to learn by doing, making collaboration and sharing their specialities count. Discovering that intercepting a satellite’s radio signal orbiting at an altitude of nearly 1,000 kilometres was within their grasp is a very representative introduction to a year at the De Vinci Innovation Center.

“This pre-school week was as fun on a community level as it was technically challenging. A very motivating taste of the program to come!” (Julie Policart, Class of 2023). 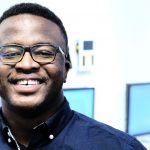 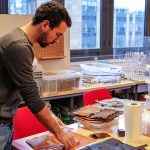 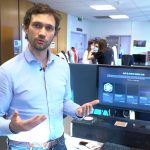