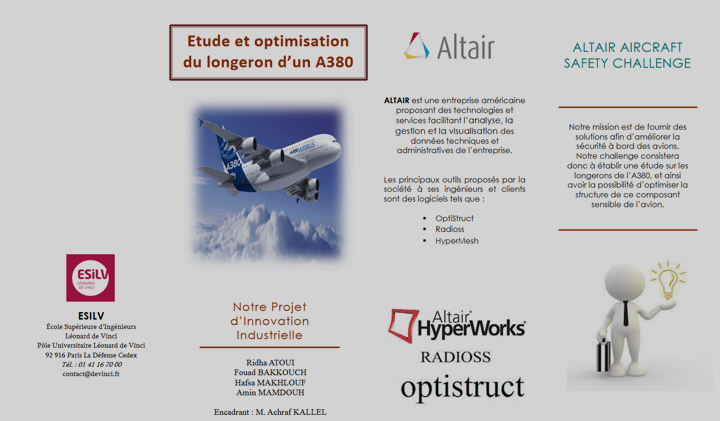 During this project for our last year of study , we decided with our partnership ALTAIR, to work on the last airplane of AIRBUS, the A380. Our target is to improve the security on this airplane.

During our research, we discovered that in 2014, the European company asked all the companies using the A380 to make an inspection on the spar of the airplane, Indeed the level of endurance is not as high as they thought. These spars of the plane is the main structural member of the wing, running span-wise at right angles to the fuselage.

This part of the plane must be strong because it is the part which will soak around 99% of the strength of forces. So it’s on this part that we will work during our project, the goal is to study those spars and to optimize them. 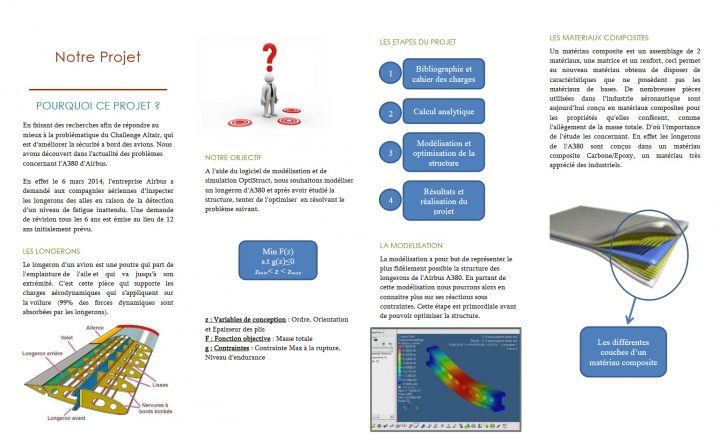 We realized the realization of the A380 according to the characteristics and the dimensions found during the bibliographical study. This modeling of structure made under OptiStruct was realized in composite materials Carbon / Epoxy, the shape of this one looking like an oblique beam embedded in the body of the plane.

The studied strengths and the calculated constraints were taken into account in the study. However due to the lack of information concerning the central spars of the plane which are considered as confidential, we probably made an error concerning the modeling or the collected data. Indeed the calculations thrown under the same software Altair gave us improbable results.