If most people choose to visit Paris for its sites, its culture or its gastronomy, students in Engineering might have other motives to go study in the capital of France.

Studying in Schools of Engineering located Paris such as ESILV allows international students to enrich their knowledge by visiting many places and museums focused on engineering, innovation and science.

The Eiffel Tower is a must-see for any person visiting Paris. But the famous French monument is especially interesting for students in engineering: this giant tower of steel is one of the world most impressive work of engineering.

Gustave Eiffel, the genius behind the Eiffel Tower, was himself a famous engineer. He built the tower for the 1889 Paris Exposition to celebrate the 100th anniversary of the French Revolution.

And, fun fact, the Eiffel Tower was supposed to be removed after the event. The tower ownership passed to the City of Paris, and it was eventually decided to keep it as a permanent monument. It has now become the symbol of Paris and France, and one of the most – if not, THE most – famous monument in the world.

Another must-see in Paris. The Louvre is not only the place to be for any art lover, it is also a wonderful museum for curious engineers eager to enrich their knowledge and to find inspiration.

The architecture of the Louvre Museum is a wonder on itself, and engineers will be particularly drawn to the glass pyramid at the entrance of the museum. It is the very first big construction to be made out of laminated glass. It is 21,64 metres high and is completely coated with aluminium lozenges that weigh 200 tonnes.

The Louvre museum also showcases works from famous geniuses such as Leonardo Da Vinci, both famous for its art and its innovative ideas concerning engineering. For the 500th death anniversary of Leonardo Da Vinci, the Louvre hold an exhibit centred around its work, especially as an inventor.

The Musée des Arts et Métiers might not be as famous as the Louvre, but it is the ideal place for any person with some kind of interest in engineering and science. This museum, founded in 1794, is dedicated to industrial design.

The Musée des Arts et Métiers was initially a school of engineering. Nowadays, it showcases all of the machines, models and drawings that were used all along the XIXth and the XXth century. It is therefore a place to visit for any student in engineering.

It has more than 80 000 objects and 12 000 drawings in its collection, and about 2 500 of them are on permanent showcase in Paris. Some of its more interesting pieces are for example the original version of Foucault’s pendulum, the original template for the Statue of Liberty and some of the world’s first planes.

Speaking of planes, the Musée de l’Air et de l’Espace is the place to be for any engineering student majoring in aeronautics. Located in the near suburbs of Paris, this air and space museum is one of the best in the world in this category.

The Musée de l’Air et de l’Espace showcases more than 400 aircraft, and 150 of them are on full display including some iconic planes like the French Concorde or the Supermarine Spitfire.

Le Bourget, the place where the museum is located, is a worldwide famous site for aviation figures. It is also the birthplace of commercial aviation and some of its buildings are also very culturally interesting in terms of Art Deco and architecture.

This site specialised in scientific, technologic and engineering culture. Its goal is to spread scientific knowledge to a large audience, including children, through many exhibits and playful activities. It’s a place worth visiting for any young engineer, to enrich their knowledge and taking part in interactive workshops centred around their industry.

One of the most notable elements of the Cité des Sciences et de l’Industrie is the Géode, one big geodetic dome, the only one of this type in Paris. This structure was extremely futuristic back in the 80’s and was the peak of French technology for the time.

The Cité des Sciences et de Industrie showcases many temporary exhibits about all the aspects of the science and the engineering industry, such as robotics, astronomy, computer science, Industry 4.0, and so on. It also holds conferences and meetings centred around higher education, students and employment. 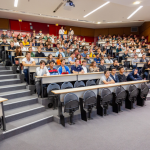