On Thursday 1 October, several students from the class of 2021 at ESILV, accompanied by members of the DeVinci Partners association, visited Capgemini’s new headquarters, named “147”. It was an opportunity for the engineering students to learn about the agile methods promoted by the Group, leader in digital transformation, and to catch a taste of tomorrow’s workspace: the flex office!

The aim of this visit, co-organised by Capgemini and DeVinci Partners, was to provide an opportunity to around ten students to discover the working methods and environment of this flagship of the French economy. The DeVinci Partners student association’s role includes increasing the reputation of the schools and students among recruiters. Capgemini is one of the significant partner companies of the Pôle Léonard de Vinci, actively engaged in the school’s teaching methodology and is among the employers of choice in engineering.

Immersion in the “flex office” culture

In their new spaces, more than 3,000 Capgemini employees have been testing the pleasures of flex office – the new types of workspaces with no assigned desks – since April 2019.

The new building, called ” 147 “, at Issy-les-Moulineaux, has been conceived to correspond to the culture of collaboration and to reflect the Group’s corporate philosophy that technology would be worthless without people.

It is in that vein that the name that was given by the employees, “One for Seven” or 147, echoes both the building’s physical location and the seven values of Capgemini: honesty, boldness, trust, freedom, pleasure, modesty, solidarity.

A discovery day under the sign of agility and team cohesion

Several activities took place during the day, including a tour of the facilities, a corporate presentation of the Group, its missions, vision and objectives. The lecture took the form of a contest with a “bonus” prize. During the tour, students were also presented with some new projects the company is developing. They also took part in a group activity, based on the agile method.

ESILV students were split into two teams, testing the agility at scale approach, a widely used method by Capgemini to facilitate the transformation of its customers at all levels.

More than just groundbreaking working methods and brand new spaces, a whole ecosystem was unveiled during a meeting with Sarah Barakat, Capgemini’s HR manager and Stéphane Rebecca, the Group’s head of school and university relations.

“The good team cohesion at Capgemini is possible first of all because the new collaborators are welcomed by a week of integration in a château, which strengthens the links between the new and old employees.

When it comes to workspace, the company has a large open space that encourages flex office, allowing the different staff members to work in a different environment every day,” says William, a student in the 2021 class of the ESILV’s Modelling and Computational Mechanics major.

At the end of the final year of the engineering cycle, ESILV students must complete a 5 to 6 month final-year internship, which allows them to implement their professional skills and prepare for professional integration in a company. Capgemini is one of the leading employers among future engineers, through these internships, most of which are proposed in a pre-employment logic. 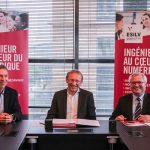 Automotive Industry: ESILV Class of 2023 Receives the Patronage of Stellantis 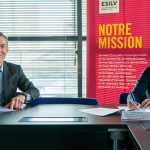 Juliette Macret, President of IBM France Financement, Patron of the Class of 2022 for ESILV Students 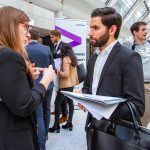